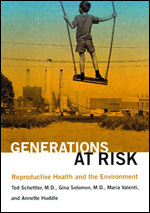 Dr. Ted Schettler[1] is the author of Generations at Risk, MIT Press

USGBC will be guided by the precautionary principle in utilizing technical and scientific data to protect, preserve and restore the health of the global environment, ecosystems and species. US Green Building Council Guiding Principle # 4

When an activity raises threats of harm to the environment or human health, precautionary measures should be taken even if some cause and effect relationships are not fully established scientifically. Wingspread Statement on the Precautionary Principle 1998

BW: The US Green Building Council recently adopted the Precautionary Principle as one of six guiding principles for the organization. It is the first business association in the United States to make this commitment, and the only group that sets "green" standards that had done so. Why is this important?

TS: It is important because it distinguishes the group and defines the green building movement as a serious effort to recreate a massive and fundamental sector of the global economy to be healthy and sustainable. The UN's 1992 Rio Declaration on Environment and Development stated that the precautionary approach needed to be widely applied if we were to avoid serious irreversible damage to the earth's living systems. The USGBC's approach is fair, wise, necessary, and ultimately cost effective because prevention usually costs less than remediation with more equitable distribution of costs and benefits.

BW: How do you think the precautionary principle meshes with the green building movement?

TS: It seems to me that in critical respects the rationale for the green building movement parallels the rationale for the precautionary principle movement in science. Both movements present a head-on challenge to old assumptions upon which the status quo rests, for example, that humans are largely separate from the environment and that we largely understand and can control and shape natural systems to our ultimate benefit. Both are clear that ethics and values should be present and transparent in the role of science-based decisions and professional practice. Both weigh a responsibility to future generations in the balance of the judgments they make today. And both are challenged by defenders of the old order who trivialize these concerns as "unscientific" and "emotional."

BW: What is your response to those charges?

TS: Values and ethics are and have always been integral to good science. Proponents of the Precautionary Principle are explicit and transparent about the values we bring to the science and its application -- the importance of preventing harm, respect for the integrity of ecological systems that support life, and responsibility to this and future generations are among them. Critics of the Precautionary Principle often fail to state the values they seek to further with their method -- they foster the myth that science is value-free. In truth, science always includes value judgments, such as determining an appropriate threshold for declaring something to be proven when absolute certainty is unattainable. "Lack of proof" is often used as an excuse to postpone protective measures, without making it clear that "proof" is a concept with political and social as well as scientific dimensions. Scientists must also decide whether to favor false positive or false negative conclusions when analyzing data. "Safety" is not provable because you can't prove something will not happen, so any determination of "safety" is a value judgment, not an objective truth. Primary prevention is a basic principle of public health, and preventive measures often entail acting before cause and effect relationships are fully understood.

BW: The USGBC embraced the precautionary principle amidst a sustained challenge by the chemicals, plastics and timber industries advocating for much less rigorous green building standards. Those industries account for an influential percentage of the building materials economy, and they are leading opponents of the Precautionary Principle globally. What do you make of this?

TS: I think one thing that resonates with green building professionals is the complexity of models. People who try to understand how a complex system like a building functions are more comfortable than some others are with the notion of everything being interconnected, and the unlikelihood that there is a single definitive cause and effect answer to complex questions. Like most people, green building professionals are surprised to learn that the safety of most chemicals we use routinely has not been evaluated, even if they are legal to use. So the argument against precaution - that we postpone making changes until we have proven the cause and effect link between a chemical exposure and an adverse impact -- rightfully appears overly simplistic, counterintuitive and even counterproductive.

BW: From toxic chemicals to climate change, the most heated debates in society are not so much about what to do to address a problem, but whether there really is a problem. We spend years debating conflicting scientific data, or bemoaning inadequate scientific data. How does the Precautionary Principle address the question of uncertainty?

TS: It is important to acknowledge various kinds of uncertainty. One kind of uncertainty is statistical. This has to do with not knowing the exact value of a single variable like, for example, off-gassing from a building material. But we can measure it and ultimately reduce the uncertainty considerably. Another kind of uncertainty is model uncertainty. This arises from inadequate understanding of the relationships among variables in a system. How, for example, will that off-gassing affect building occupants over time? This is far more complex and difficult to study. As models become more complex, uncertainty evolves into indeterminacy. This leads to fundamental uncertainty. Here we deal not only with indeterminacy but often fail to know what we don't know. We may not even know what questions to ask. Precaution takes a respectful approach to complex systems, acknowledges the limits of science, and is wary of arrogance. A precautionary approach looks for early warning signs and opportunities for prevention. Whatever we know, do we know enough to act? Do we have other ways of doing things that respond to early warnings and avoid foreseeable problems? Precautionary decision-making can actually increase options and add resilience to the system. As I learn more about green building, it seems to me that these notions fit comfortably within the evolving discipline of the green building professional.

BW: I have to end my questions here, but I would encourage interested readers to visit the FAQ section of the Science and Environmental Health Network, your comprehensive website, www.sehn.org.

[1] Ted Schettler has a medical degree from Case Western Reserve University and a Masters degree in Public Health from Harvard University. He is Science Director of the Science and Environmental Health Network. (www.sehn.org) He is also co-chair of the Human Health and Environment Project of Greater Boston Physicians for Social Responsibility. Dr. Schettler co-authored Generations at Risk (MIT Press, 1999), which examines the reproductive health effects of exposure to a variety of environmental toxicants, and In Harm's Way - Toxic Threats to Child Development, which examines the impacts of environmental contaminants on children's neurological development. He has served on the advisory committees of the US EPA and National Academy of Sciences. He on the medical staff of Boston Medical Center and has a clinical practice at the E. Boston Neighborhood Health Center.