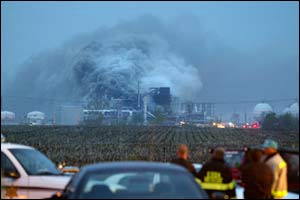 A week after the US Green Building Council's (USGBC) Technical Science Advisory Committee determined that PVC was one of the most unhealthy building materials in part due to occupational exposures to vinyl chloride, the federal Chemical Safety Board (CSB) found that a massive release of vinyl chloride led to the explosion that killed 5 workers at a PVC factory in Illiopolis, Illinois on April 23, 2004. The CSB Investigation Report is made all the more relevant to green building professionals in light of the USGBC's finding that PVC flooring ranked absolute worst in both human health and environmental factors compared to the alternatives reviewed. The destroyed factory, owned by Formosa Plastics, had been a major supplier of vinyl resin for Armstrong floors.

The CSB is the industrial equivalent of the National Transportation Safety Board (NTSB), the agency that rushes investigators to the scene of plane crashes, train derailments and the like. [1] The CSB's March 6, 2007 report found among other things that the cause of this accident, "inadvertently draining a reactor, is a serious hazard in the PVC manufacturing process." [2] Indeed just 60 days before the fatal explosion, workers at the same facility accidentally released an undisclosed amount of vinyl chloride. The report also notes that 8,000 pounds of vinyl chloride were released by accident in June 2003 at the company's Baton Rouge, LA facility. [3] A year after the explosion, in May 2005, another 2,500 pounds of vinyl chloride were accidentally released from the company's Delaware City, DE location. [4] Each release was caused by the same problems which lead to the catastrophe at the Illiopolis facility in April 2004. Other PVC factories owned by Formosa have also suffered catastrophic explosions in the recent past. [5]

The chemical at issue, vinyl chloride, is a human carcinogen whose total danger is believed by many to be underestimated by the EPA. A 2005 study in the peer reviewed journal American Health Perspectives [6] found that the "EPA employed discredited scientific practices at the behest of the chemical industry in order to lower estimates of vinyl chloride's cancer potency by tenfold." [7]

The USGBC's study of PVC found it "consistently among the worst materials for human health impacts" based upon exceedingly conservative estimates of impact. To understand how conservative, consider that its evaluation of PVC only accounted for exposures from normal operations to workers in the factory and neighbors at the fenceline. The health impacts of the extraordinary accidental releases from Formosa's facilities described above -- and the deadly explosions that can follow as at Illiopolis -- are beyond the reach of tools like LCA and risk analysis.

This new CSB report further underscores the significance of the USGBC's decision to be guided by the Precautionary Principle in its evaluation of green building materials and to consider fully the impacts of manufacturing processes on production workers. It is the essence of precaution to avoid hazards and risks that are avoidable. So remember this the next time you specify pipe, roofing membranes, wall coverings and especially flooring: the chemical that killed those 5 men in Illiopolis is essential and unique to only one material you are considering: PVC plastic, also known as vinyl. [8]

[1] The CSB is an independent federal agency charged with investigating industrial chemical accidents. The agency's board members are appointed by the president and confirmed by the Senate. CSB investigations look into all aspects of chemical accidents, including physical causes such as equipment failure as well as inadequacies in regulations, industry standards, and safety management systems. The Board does not issue citations or fines but does make safety recommendations to plants, industry organizations, labor groups, and regulatory agencies such as OSHA and EPA.

[8] To be sure, vinyl chloride is not the only avoidable risk in the production of flooring, or plastics, or materials generally. However, the risk of explosion is only one of the negative environmental health consequences of vinyl chloride whose use is both essential and unique to PVC plastic. Related impacts include dioxin emissions from manufacture and fire, the use and release of toxic additives such as cadmium and lead stabilizers and phthalate softeners, and the threats associated with the production of massive quantities of chlorine gas as the basic building block of vinyl chloride production. (See e.g., "Code Green: PVC Elimination May Be The Most Significant Contribution You Can Make to Homeland Security.") These factors lead HBN to the conclusion that PVC is the worst plastic for the environment.