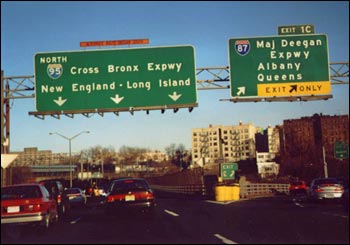 Four months after the death of New York's urban visionary Jane Jacobs (May 4, 1916 -- April 25, 2006) [1], I found myself jockeying for position on the Cross Bronx Expressway stretch of Interstate 95. [2] By the time of her death, Jacobs was revered; and the philosophy of urban renewal she opposed was reviled. But I-95's monotonous lacerations through cities from Boston to Washington, DC remain monuments to the limits of Jacobs' contemporary influence. I wondered: how will history judge the structures that will define our generation's green building legacy?

Urban Renewal, like the Green Building movement, was inspired and catalyzed by some of the best and brightest design professionals of its generation. Their persuasive vision promised to link financial success and social well-being within a pleasing aesthetic.

But something went wrong.

A big part of what went wrong is that those with the most to gain or lose financially had the greatest incentives and resources to wrest control of the movement from the merely civic-minded. Even though most projects were subject to public scrutiny and debate, the big moneyed interests routinely prevailed over the protests and counterproposals of architects, planners, community organizations and advocates working in the public interest.

Similar forces threaten the Green Building movement today. Deep pocketed product manufacturers understand the promise of a "green" marketing advantage conferred upon their product by a LEED credit, and the peril of not having a "green" product in today's market. Consequently they are pouring millions of dollars in cash and paid staff hours into controlling -- and changing -- the very definition of "green building."

According to the plastics and chemical industries, there is no plastic that is not a green building product. According to the timber industry, all wood is "good wood." Last year trade associations representing the two industries unleashed an unrelenting attack on LEED at both the state and federal level. They continue to threaten LEED's assimilation into governmental green building standards unless and until their products receive favorable treatment within the Materials and Resources section.

It is in this context that the USGBC Board has directed the membership to consider a proposal this fall that would meet timber industry demands and award a LEED credit to the greenwash wood certification label known as the Sustainable Forestry Initiative (SFI). The Board's move is opposed not only by virtually all public interest groups dedicated to forest protection, but also by wood product manufacturers who have dedicated themselves to the consensus-based Forest Stewardship Council (FSC).

Hundreds of environmental and health advocacy groups also urge reductions in the use of PVC building materials due to the plastic's unique association with human carcinogens, heavy metals and phthalate plasticizers. Most leading green building tools and experts [3] -- our era's Jane Jacobs -- encourage reduced PVC use, contradicting the USGBC leadership's decision to remove a proposed PVC reduction credit from an early draft of LEED-CI (Commercial Interiors). The USGBC created a task force to study the issue. Their final report is also due this fall.

One doesn't need 20-20 hindsight to see the connection. Will the next generation see in our buildings the early expression of green building ideals and ideas? Or will they see in the vinyl and endangered (by then extinct?) hardwoods another monument to big money's desecration of big ideas? The response of the active membership of the USGBC to the course being set by its elected board and professional staff will mark a turning point in the history of this movement.

[1] Renowned author of arguably the most influential book on American urban planning, The Death and Life of Great American Cities, see http://en.wikipedia.org/wiki/Jane_Jacobs