Architect of the Environmental Justice Movement 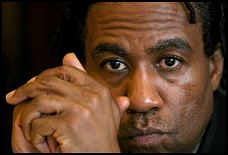 "I've seen the devastating impact of PVC production down here. This [house] shows that you don't have to be addicted to a one-sided way of doing things that is destroying so many people and the environment. This cannot just be described as a construction site. This is a spiritual alter today." -- Damu Smith, on-site during construction of a PVC-free Habitat for Humanity home in New Orleans, Louisiana. April, 2004

Last November, Damu Smith, a principal architect of the contemporary Environmental Justice movement, addressed our Healthy Building Awards reception during the annual GreenBuild conference. Though in the terminal stages of cancer, he wanted to support the green building movement because he appreciated its relevance to his life's work. He was struck by the ferocity of the reaction it provoked from polluters, something he experienced first hand while helping Habitat for Humanity construct a PVC-free home in New Orleans.[1] "All we are saying is that we can build a safe house this way, and this threatens them. This new vision of how we can do things in this world to sustain our environment and create healthy and safe communities, it brings environmental justice full circle," was his message.

Damu succumbed to colon cancer on May 5th. Ever since, I have not been able to get an old folk song out of my mind, How Can I Keep From Singing. At first I received it as consolation for the loss of a friend who loved singing. Over time it stirred my consciousness as a reminder of what Damu called the power of spirit in action. 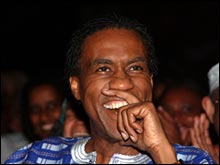 My life flows on in endless song

I hear the real, though far off hymn

That hails a new creation

Through all the tumult and the strife,

I hear the music ringing;

It sounds an echo in my soul

How can I keep from Singing?

Damu worked for nearly a decade in places that are rarely featured in environmental calendars and coffee table books: the river bank communities of Cancer Alley, small towns sandwiched between chemical plants near Lake Charles, and industrial sacrifice zones throughout the Deep South. His efforts literally changed the face of the American environmental movement by bringing to prominence the people who are, more often than not, the first casualties of pollution: the poor, immigrants, people of color. He challenged, motivated and supported activists of any race and from every region of the country as allies against the racism and related divide and conquer tactics exploited by polluters and profiteers.

Damu was accomplished enough, eloquent enough, and even handsome enough, to attract many offers of high-profile positions in the environmental movement and among the American political elite. He always demurred, citing a calling to the tumult and the strife of grassroots organizing. He preferred standing with -- no, moving, always moving among -- the people who found themselves involuntarily on the front lines of life and death environmental battles. It could have been dispiriting, embittering work.

"We. Are. Winning." He would say, just like that. Each word a declaration. And we all did win when Damu helped small towns in Louisiana turn away nuclear waste (Houma, LA), block construction of a toxic PVC plastic plant (Convent, LA) or negotiate relocation from the shadow of a Shell Oil refinery (Norco, LA). What may be more remarkable in retrospect is how this undisputable record of accomplishment is celebrated less than the recollection of Damu's dignity and grace, enthusiasm and hope, and the spirit in action he brought to every cause and every community. 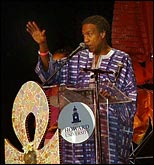 What through the tempest loudly roars,

I hear the truth, it liveth.

And though the darkness round me close,

Sounds in the night it giveth.

No storm can shake my inmost calm

While to that rock I'm clinging.

Since love is lord of Heaven and earth

As the old song swells to crescendo, it recounts vile imprisonments and trembling tyrants, biblical metaphors in the oral tradition that aptly suggest episodes from Damu's heroic stride across our time. But in the end, we are told, the singer won't be silenced when -- when -- friends, "by shame undefiled" "rejoice far and near." For me that is both the consolation and the reminder offered by the spirit in action that remains Damu Smith. 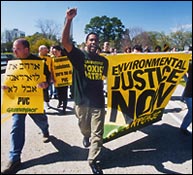 When tyrants tremble, sick with fear,

And hear their death-knell ringing,

When friends rejoice both far and near,

In prison cell and dungeon vile

Our thoughts to them are winging.

When friends by shame are undefiled,

To rejoice in the spirit of Damu, visit www.damusmith.org; attend the community celebration of his life scheduled for May 20, 2005 at the Plymouth Congregational Church, 5301 North Capitol Street in Washington, DC Beginning at 5 PM; or speak truth to power the next time your voice is needed!

[1] The Louisiana vinyl industry attacked the project, issuing veiled threats that it would withdraw its financial support to other Habitat affiliates. Read the related Healthy Building News article here. See also Letter from Tim Burns, President and CEO of the Vinyl Institute, to Millard Fuller, President and Founder, Habitat for Humanity International (Feb. 26, 2004) http://www.healthybuilding.net/pvc/vinyl_email.html. See full copy of the Times-Picayune story (April 8, 2004) and the Healthy Building Network letter to the editor (April 12, 2004) here.