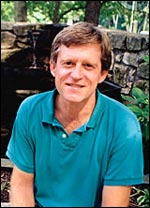 Rick Maas, Ph.D., a long-time friend of the environmental health and justice movement, died at age 54 on December 12, 2005 after a brief illness.[1] One of the nation's leading water quality researchers, Rick was founder and co-director of the University of North Carolina Asheville's Environmental Quality Institute (EQI), an EPA-certified laboratory which for nearly 20 years has served government agencies, the private sector and non-profit groups with education, research and technical assistance on toxics issues.[2] He helped found the Volunteer Water Information Network, which now has some 100 volunteers monitoring the water quality at 212 sites along Western North Carolina streams and rivers.[3]

In 2002, Rick developed an arsenic testing research project and a low-cost arsenic testing kit that he made available to HBN and citizens across the nation.[4] He went on to work with our colleagues at the Environmental Working Group to analyze test results from hundreds of samples submitted from across the country.[5] His work proved instrumental to our successful effort to phase-out most uses of arsenic treated wood, and was no less important to countless local initiatives to reduce children's exposure to arsenic.

As recently as last September, Rick could be found in the news advocating for a community seeking relief from extensive groundwater contamination, in this case Camp Lejeune, North Carolina.[6] We at HBN truly admired Rick Maas. With the exception of the void now left in his loving family, there is no greater tragedy in his early death than the fact that so many students will now be denied his counsel and example of how to put science in service to the public interest.

According to news reports, Nigel Howard -- alive and well, thankfully -- has left the US Green Building Council, where he has held senior positions since 2001.[7] A quick Google search turns up adjectives such as dignified and affable next to his name, to which we would add smart and indefatigable. Readers of these pages will know that HBN and Nigel disagreed on certain policy matters, such as the USGBC's evaluation of PVC building materials and the appropriate application of life cycle assessment (LCA). That did not diminish our respect for his role in dramatically increasing the profile and influence of the USGBC and, by extension, the green building movement as a whole. Doubtless he will continue to be an important green building leader in his next appointment.

As for the USGBC, it now faces a leadership void in two areas which Nigel continued to dominate in his final post as Chief Technology Officer. First, the Technical Science Advisory Committee (TSAC) process currently holds jurisdiction over one of the most contentious issues facing the USGBC: the status of PVC. Second, the "LCA into LEED" process has been framed as defining a life cycle assessment framework for the development of LEED 3.0. This will set an important precedent with regard to the appropriate use of life cycle analysis.

The landscape of the green building profession has changed dramatically since the USGBC initiated these two processes. The marketplace is rejecting PVC [8] and expanding professional literacy on life cycle analysis. As the USGBC considers new leadership for these initiatives, it is important to re-evaluate their mission and relevance to leadership in the contemporary green building movement.

[1] Memorial contributions in the name of Rick Maas can be made to organizations listed here: http://www.unca.edu/news/releases/2005/Maas.html