More Lies From The Vinyl Institute: Foiled Again By The Makers of BLUE VINYL 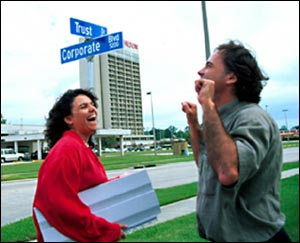 A critics' darling at film festivals across the globe and Winner of the Excellence in Cinematography Award at Sundance, BLUE VINYL is an expose that has been called the green building movement's "first cult film" (Alex Wilson, Environmental Building News) and applauded as "funny and irreverent... one of Sundance's best [2002] documentaries!" (Roger Ebert, Chicago Sun-Times). Judith Helfand and Dan Gold co-directed BLUE VINYL.

HBN: The Vinyl Institute issued a press release on May 16, 2005 that said the DVD edition of BLUE VINYL[1] "changed the story" from the original HBO broadcast, and the "premises have been undermined."[2] Is this the truth?

Dan: Their statement is completely false.

Judith: In fact, the case against vinyl is stronger in the DVD.

HBN: The Vinyl Institute criticizes you for cutting a scene featuring the motorcycle-riding Lori Sanzone whom they say "claimed that she had ASL," a cancer uniquely associated with exposure to vinyl chloride, when she didn't.[3]

Dan: She didn't "claim" to have ASL. Doctors diagnosed her with ASL and asked her when she had been exposed to vinyl chloride. Independent experts affirmed the diagnosis for us.

Judith: Two years after the broadcast, the diagnosis was changed. Good for her.

Dan: The movie's premise is actually strengthened in the DVD edition because in taking Lori out of that scene, we ended up increasing screen time for the Columbia University researcher whose study challenges one of the main defenses of vinyl. The Vinyl Institute maintains that only workers who actually made the PVC before 1974 were harmed by exposure to vinyl chloride above current legal exposure limits. Dr. Paul Brandt-Rauf says that "while they appear healthy, workers who were exposed [to vinyl chloride] after 1974, [at levels below the current exposure limits the Vinyl Industry claims are safe] have genetic mutations that are identical to the mutations we would find if they did develop angiosarcoma of the liver."[4]

Judith: That research has huge implications for the thousands of people working as fabricators, making PVC products, not just chemical workers making the PVC pellets. Lori was a fabricator. Her interview put those laboratory findings in the context of a living person facing the question of what this research might mean in real life. That's gone now, but the scene still tells the story of another fabricator named Michael Wayne Cox, who died of ASL. Vinyl manufacturers settled a lawsuit with his wife for an undisclosed sum.

HBN: What about the Vinyl Institute's reference to the "class-action lawsuit against Italian vinyl industry officials . . . that was thrown out of court even before the movie first aired in 2002."

Judith: Didn't we actually say that in the original broadcast?

Dan: We said it but we didn't show it, because the manslaughter verdict came in too close to broadcast and we couldn't re-edit. But the fact is the Italian vinyl executives were only acquitted on the criminal manslaughter charges. The widows of the workers had already "won"—(if you could call it that) and been paid damages—in the civil part of the trial. In fact, we added a special feature in the DVD edition that shows the not-guilty of manslaughter verdict being delivered. If the Vinyl Institute is so proud of the verdict, they should host a public screening of that feature. I think people will be impressed by the drama of the day. Even lawyers for the vinyl executives look surprised that their clients got off.

HBN: What other kinds of special features are included on the DVD edition?

Judith: There's a great follow up to the Habitat for Humanity sequence in the original film—the first virtually PVC-free Habitat house in New Orleans. And in the "Consumer Revolution" feature we show the impact BLUE VINYL has had when used by organizers and activists, or screened by mega consumers like Kaiser Permanente and the City of San Francisco.

Dan: I like the part where New York Attorney General Elliot Spitzer's assistant attorney general says that the first resource he encountered in preparing his defense of the vinyl exclusion in the New York green building tax credit was BLUE VINYL.

HBN: Not bad for what the Vinyl Institute called "a muckraking film."[6]

Judith: Which makes the vinyl industry what, the . . .

Daniel: You know, Theodore Roosevelt coined that term to describe investigative journalists of his era who "went after dirt" with "merciless severity." American heroes like Ira Tarbell, who stood up to the Standard Oil monopoly, and Upton Sinclair, who exposed the horrors of the Chicago meat-packing plants and the immigrants who were worked to death in them were hailed by Roosevelt, provided "that the attack is of use only if it is absolutely truthful."[7] I think the analogy works. We stand by our story.

[1] BLUE VINYL is available for rent in better video stores or you can order the BLUE VINYL DVD edition at http://www.myhouseisyourhouse.org.

[3] ASL is angiosarcoma of the liver. The Vinyl Institute does not dispute that ASL is caused by exposure to vinyl chloride.

[4] The Vinyl Institute does not dispute that ASL is caused by exposure to vinyl chloride, it only disputes how much exposure is necessary to cause the fatal disease. The vinyl industry refuses to conduct studies of fabricators, or to investigate potential health impacts of any workers routinely exposed to vinyl chloride at or below the occupational exposure limit.

[5] The affidavit of the New York State's toxicologist is available on the Healthy Building Network's website at http://www.healthybuilding.net/pvc/resources.html. To obtain a CD of legal documents associated with the case, write to us and ask for "Vinyl Under Oath."