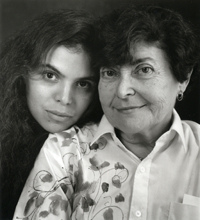 On Tuesday, September 17th, Florence Helfand passed away at age 84. She was the mother of filmmaker Judith Helfand, and along with her late husband, Ted, a star of Judith’s 2002 award winning documentary, Blue Vinyl. More than that, Florence was the courageous if reluctant face of a generation of DES Mothers, 5 million women who took the synthetic estrogen diethylstilbestrol (DES) with devastating health consequences for their offspring, especially girls.

In 1990, at age 25, Judith was diagnosed with DES-related cervical cancer. She went home to her family to heal from a radical hysterectomy. There she picked up her camera. Her video diary, A Healthy Baby Girl, was shot over five years and was first broadcast on PBS in June 1997. It goes beyond loss to document mother-daughter love, family renewal, survival, political awakening, and community activism.

Five years later, Blue Vinyl was inspired by Judith’s desire to use her experience with this powerful endocrine-disrupting chemical to inform the public about the dangers of similar chemicals associated with the production, use and disposal of PVC plastic. The multi-generational impacts so well documented with DES – ranging from numerous reproductive disorders to cancer – are a growing concern as humans are exposed to increasing amounts of chemicals that mimic hormones in our bodies – from the phthalates in PVC, to the BPA in epoxy-based compounds and coatings. This was affirmed just this week, in an important statement from the American College of Obstetricians and Gynecologists (the College) and the American Society for Reproductive Medicine (ASRM). In some of the most powerful scenes in Blue Vinyl, Judith and Florence recall the unique edge to the pain and heartache caused by these intergenerational effects.

Florence was not a crusader. She did not play to the camera, and her daughter/director didn’t lionize her on film. The power in these films comes from the raw honesty and intimacy that she agreed to share with strangers, a profound expression of both love and trust in her daughter.

For years after the initial broadcast of Blue Vinyl, a remarkable number of women I met in the green building movement would identify themselves to me as DES mothers or daughters. I hope Florence appreciated the reach and impact of her role in these films. I won’t forget it.

“From caring for me when I was ill, to letting me film our innermost pain and loss, to working with me to bring the film to the public, to laughing with me in the face of heedless corporate power, my mother has taught me all I need to know about parenting, motherhood and continuity.” Judith Helfand

For more information on DES: www.desaction.org;

For more information on other endocrine-disrupting chemicals: www.endocrinedisruption.com

For information on Blue Vinyl & A Healthy Baby Girl: www.judithhelfand.com