Earlier this year, one last piece of light density residential fiberglass insulation bearing formaldehyde-based binder rolled off a production line somewhere in the Midwest United States. Then the line stopped, and a new binder came on line.

As of October 2015, every fiberglass insulation company in the United States and Canada has phased out the use of formaldehyde-based binders in lightweight residential products.

Formaldehyde is a human toxicant with a long history of use in residential insulation. [2] Phenol formaldehyde remained the industry standard binder for the next seven decades.

In 2002, Johns Manville moved first, shifting to an acrylic binder in its lightweight fiberglass insulation. The Healthy Building Network (HBN) used the Johns Manville example (and the introduction of Bonded Logic's formaldehyde free cotton insulation batts) to support a credit in the Green Guide for Health Care (GGHC) in 2003. GGHC rewarded the use of insulation products without formaldehyde.

Other manufacturers resisted changing. They claimed that phenol-based formaldehyde resin released very little formaldehyde and that the interior walls protected occupants from emissions. They pointed to indoor air quality certifications to prove the products' safety.

HBN Policy Director Tom Lent debunked this myth in a January 2009 memo. Testing procedures, like the California 01350 protocol used by leading indoor air quality certifiers, were "not particularly protective for long-term exposure to formaldehyde emissions," he noted. [3] Tom pointed to evidence from the industry's own 01350-based testing that fiberglass insulation using phenol formaldehyde emits significant levels of formaldehyde even through wall assemblies for at least several months after it is installed and would never meet health protective standards in homes.

"Alternative insulations without formaldehyde-based binders that pass the 01350 test are available now and even more competitive products could be available rapidly if encouraged with a clear market signal," he wrote.

The signal from the green building community grew brighter. The Living Building Challenge's Red List, introduced in 2007, banned the use of products with added formaldehyde, and was gaining traction. Our Pharos Project database launched in 2009, and disclosed the binders used in most insulation on the market. A month later, Perkins + Will, a national leader in green building design, introduced its own precautionary list, including formaldehyde.

The market received the signals and changed. In late 2008, Knauf Insulation released its EcoBatt fiberglass insulation. [6]

Guardian Building Products was the industry's last holdout. It continued to use formaldehyde-based binders until Knauf Insulation bought the company in 2014. Knauf closed a couple of Guardian plants, and converted the remaining two to formaldehyde-free technology. [7]

HBN examined formaldehyde pollution data for thirty residential fiberglass insulation factories in the US and Canada over the past ten years. The reports confirm the reformulation. As the graph below reveals, these factories released nearly 600,000 pounds of formaldehyde in 2005; by 2014, these releases dropped by 90%, to about 60,000 pounds. With the conversion of the former Guardian plants to formaldehyde-free binders, any releases going forward will come from the production of some higher density batts, which are mainly sold on the commercial/industrial market. 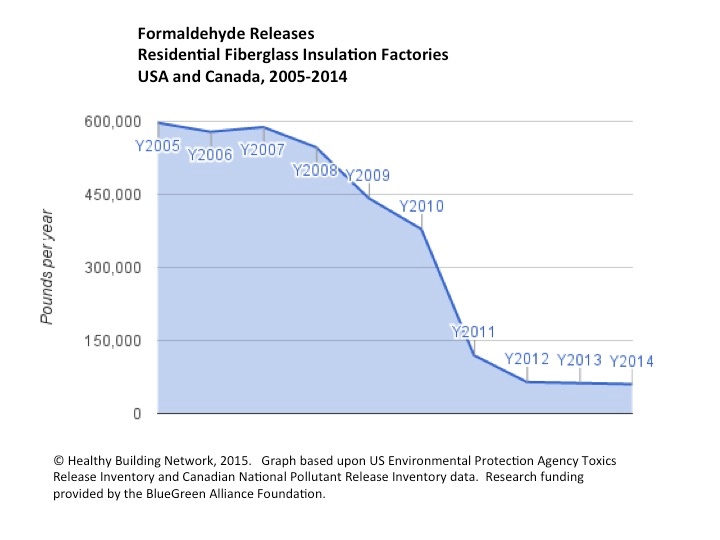 A well-informed marketplace, not federal or state environmental regulation, drove this change. From HBN's first marketplace victory in 2003 (when we campaigned to end the use of arsenic preservatives to treat wood intended for most residential uses) to this year's demise of phthalate plasticizers in vinyl flooring, we've seen building material composition change when consumers become aware of health hazards and manufacturers respond with innovative chemistries. [9]

In these cases, and many more in the works, informed consumers and visionary manufacturers are leading where regulators have been slow to act. Transparency and innovation are working.

Research for this article was supported by the BlueGreen Alliance Foundation. The BlueGreen Alliance Foundation is working to identify insulation products with the highest amounts of recycled content, and lowest amounts of toxic content. Also this year, HBN has researched insulation as part of the new Quartz Project--see its Common Product Profile for batt insulation--and as part of the Optimizing Recycling collaboration in our report Post-Consumer Cullet in California.

[3] At the time, the 01350 standard did not reflect the current science on the toxicity of formaldehyde. The 01350 standard also was designed for well ventilated offices and schools and did not yet apply to residential use of products where lower ventilation rates lead to higher, more hazardous concentrations of emitted formaldehyde. The standard was revised in 2010 to reflect a lower formaldehyde threshold and a procedure was added to address residential uses. See Tom Lent, "RE: Formaldehyde emissions from fiberglass insulation with phenol formaldehyde binder," January 16, 2009, https://web.archive.org/web/20101124210738/http://healthybuilding.net/healthcare/Fiberglass-insulation-formaldehyde-emissions-090116.pdf

[8] Unfortunately, a complete understanding of the net benefits of the replacement binders is elusive. Fiberglass manufacturers still have not fully disclosed these products' compositions. From what we know of the replacement binders, human health concerns do not appear to be as significant as those posed by formaldehyde. HBN researchers examined patents and other technical documents describing these resins and methods for their manufacture. They found that the binders now used most commonly in the industry are thermoset polymer resins consisting of a polyol-polyacrylic acid copolymer, a sodium hypophosphite catalyst, and a silane coupling agent. Some substances potentially used in these formulations pose human health hazards in their unreacted forms. See Quartz Project, "Common Products Database: batt," 2015, http://www.quartzproject.org/q/batt; CertainTeed Insulation, Sustainable Insulation Unfaced and Kraft Faced Batts (Environmental Product Declaration), 2013, http://www.sdi-insulation.com/wp-content/uploads/SDI-CertainTeed-Sustainable-Insulation.pdf; Knauf Insulation, EcoBatt Unfaced Insulation (Environmental Product Declaration), 2013, http://www.knaufinsulation.us/sites/us.knaufinsulation.com/files/EPD%201%20-%20EcoBatt.pdf; Owens Corning, EcoTouch Foil Faced Insulation (Environmental Product Declaration), 2014, http://www.owenscorning.com/NetworkShare/Shared/10019221-EPD---EcoTouch-Foil-Faced-Insulation.pdf; and Johns Manville, Patent US8865816 B2: Formaldehyde-free binder compositions containing metal-ion crosslinkers and products made there from, 2014, https://www.google.com.ar/patents/US8865816