Ray Anderson: A Summons, Maybe Even A Provocation

"To we who remain, Ray's passing is startling, a summons, maybe even a provocation." 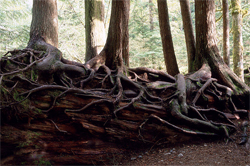 I number among the very few people in the green building movement to have enjoyed a public disagreement with the late Ray Anderson. I say enjoyed because the argument was honest, principled and civil about a topic - polyvinylchloride, also known as PVC or vinyl - that could provoke personal, sometimes venomous, attacks on those who argued the merits of PVC avoidance. But not from Ray, nor indeed from any of his Interface colleagues.

Ray Anderson and I never did come to agree on PVC. But, over the years, HBN did collaborate with various Interface business divisions in efforts that reduced toxic chemical use in manufacturing. We conscientiously considered each other's arguments on the PVC question. The points pressed by Interface did not alter our perspective on PVC, but they did shape our thinking about how to most effectively achieve our organizational mission of transforming the building materials market to advance the best environmental, health and social practices.

One thing we learned from the extended dialogue with Interface was that a shared commitment to transparency elevated the debate and helped us all grow. HBN suspended its campaigns against "worst-in-class materials" such as PVC plastic and arsenic-treated wood, and launched the Pharos Project, our on-line materials evaluation and selection tool. Built upon a foundation of transparency, Pharos enables green building professionals to evaluate and compare building products based upon comprehensive and reliable information about their environmental and health impacts - to make their own decision about PVC and other important environmental and health issues.

As our dialogue with Interface continues the company proceeds to break new ground on transparency as well, setting the bar for both life-cycle analysis and disclosure with its Environmental Product Declarations. Today, you can find InterfaceFLOR products in the Pharos Building Products Library.

Which brings us to what was to have been the original lead for this newsletter, the promise and the challenge of the USGBC's new proposed LEED Credit, Avoidance of Chemicals of Concern in Building Materials. The credit - intended "[t]o increase the use of products and materials that disclose chemical ingredient data and reduce the concentrations of chemical contaminants that can damage air quality, human health, productivity, and the environment" - heralds a new age of radical transparency in green building.

Saving for another day a discussion of all that it will take to ensure that the LEED transparency credit fulfills its promise, for now I'm struck by the concurrence of Ray Anderson's passing with the arrival of this new chapter in transparency that he and his company helped to draft.

When an old growth tree finally falls in the forest, it becomes a nurse log. The fallen giant can sustain several new seedlings, even different species, nurturing them for several human generations, until they too become giants. A diverse many from one. And so, Ray Anderson's passing at this time indeed feels to me like an existential summons, the provocation, of which Paul Hawken spoke in eulogy at his funeral last week. "Ultimately Ray's work was not about making a sustainable business, it was about justice, ethics, and honoring creation." Said Hawken in summation. "Zero waste was the path to 100% respect for living beings."

Let's take hold of that, and grow.