In previous Pharos Signal articles and Healthy Building Network newsletters, we have examined the use of coal power plant waste in building materials.  Over the past dozen years, fly ash became a low-cost way for building product manufacturers to incorporate LEED recycled content credit-friendly filler in a range of materials, like carpet backing, wallboard, and acoustical ceiling tiles.

New data appears to confirm a concern that I first raised in March 2010: that the introduction of pollution controls on coal-fired power plants would transfer mercury emissions from the air to the built environment.

A leading source of fly ash used as filler in carpet backing is Plant Scherer in Juliette, Georgia. This station, operated by Southern Company subsidiary Georgia Power, ranked as the third largest source of mercury emissions in the U.S. in 2008. By 2011, Plant Scherer’s mercury air emissions plummeted.

Environment Georgia policy advocate Jennette Gayer said the rapid reduction in mercury emissions is something to celebrate, with one important caveat:  "Even if you're taking it out of the stuff that's coming out of a smokestack, the mercury is ending up in a scrubber, which then is being put usually into a pond that is just sitting next to Plant Scherer. So it's not like the mercury is going away altogether," said Ms. Gayer.

Upon reading this, I reviewed US EPA Toxics Release Inventory (TRI) data for Plant Scherer. These reports confirm that the mercury moved from smokestacks into solid waste. 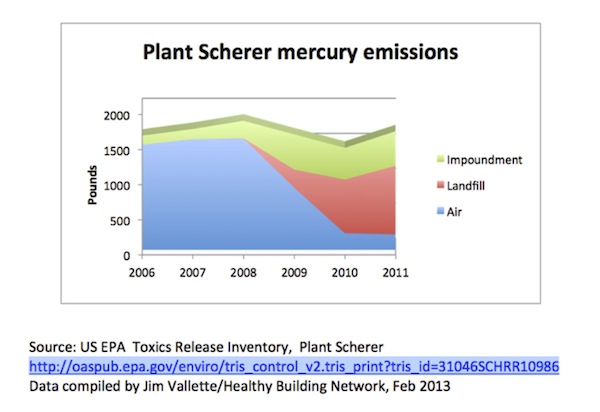 This data raises the question of whether fly ash brokers are monitoring these compositional changes to materials used in building products. Boral, an Australian multinational corporation, sells fly ash from Plant Scherer to carpet manufacturers in Georgia, under the trade name Celceram.

I e-mailed the above graph to Boral, and asked:

• Has Boral detected any increase in mercury concentrations in ash testing in the past few years, as air pollution control equipment has been installed at Plant Scherer?
• Do these concentrations rise above 10 parts per million (the global automobile industry's reporting threshold for its supply chain)?
• Does Boral conduct tests other than, and more frequent than, the monthly TCLP testing, such as XRF testing to screen out material that has high levels of mercury (or other toxic constituents)?

Boral has not yet responded, although the company has provided data to Pharos in the past (including monthly TCLP test results through March 2011).

The bottom line is that TRI data confirms a concern expressed in a 2009 EPA study, Characterization of Coal Combustion Residues III. The authors predicted,

"(T)he impact of advanced mercury emissions control technology (e.g., activated carbon injection) on beneficial use applications is uncertain. There is concern that the presence of increased concentrations of mercury, certain other metals, or high carbon content may reduce the suitability of CCRs for use in some applications (e.g., carbon content can limit fly ash use in Portland cement concrete).”

The questions that I asked Boral about mercury transfers from Plant Scherer are crucial for understanding whether pollution control devices have rendered this particular waste stream unsuitable for the indoor built environment.  I remain hopeful for some answers.