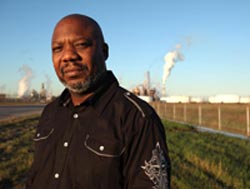 Two important environmental announcements last week reminded us how one person's certified green building product can be another person's toxic burden, and why full disclosure of product ingredients is necessary to identify a product's lifecycle environmental health impacts.

On Monday, April 11, Texas community activist Hilton Kelley was announced as the North American recipient of the Goldman Environmental Prize. The Goldman Prize, now in its 22nd year, is awarded annually to grassroots environmental heroes from each of the world's six inhabited continental regions. It is the largest award of its kind with an individual cash prize of $150,000. Past recipients include Lois Gibbs and Wangari Maathai. Hilton, a successful Hollywood stuntman, returned to his hometown of Port Arthur, TX in 2000 and formed Community In-power and Development Association (CIDA) in the belief that that Port Arthur's economic and social issues could only be addressed if the environmental problems were tackled first.

Port Arthur, TX, is located among eight major petrochemical and hazardous waste facilities on the Texas Gulf Coast. Its largely African-American West Side neighborhood has long suffered as a result of the near-constant emissions spewing from smokestacks ringing the community.

The EPA identifies Port Arthur as having some of the highest levels of toxic air releases in the country, and the companies operating the local plants have been cited with hundreds of state air pollution violations. If you look closely, you're likely to find that some of the chemicals making the people in Port Arthur sick are common ingredients in green building products.

It is for this reason that the Pharos Project calculates a Manufacturing and Community Toxics (MfrTox) score. MfrTox seeks to evaluate all chemicals used, generated or emitted during product manufacturing, and awards better scores to products that reduce or eliminate the use chemicals of concern, or emit them less frequently.

Pharos also requires 100% disclosure of a product's material contents, whereas many green product labels rely upon certifications that a product has no or low emissions of a limited range of chemicals. The importance of this distinction was driven home last week, on April 13, when the EPA released action plans to address the potential health risks of methylene diphenyl diisocyanate (MDI), toluene diisocyanate (TDI), and related compounds. These chemicals are essential for polyurethane systems, including spray foam insulation, adhesives, concrete sealants, and floor finishes.

Many of this country's largest TDI and MDI manufacturing plants bracket Hilton Kelley's community, and release major amounts of these and other highly toxic chemicals into the air and water. Bayer's TDI and MDI manufacturing plant in Baytown, Texas, for example, reported 1.4 million pounds of toxic releases from 2006 to 2009, including diisocyanates, phosgene, chlorine, TDI, and MDA (the precursor to MDI, and now a subject of the EU's REACH phase-out).[1] This toxic emission profile is typical of TDI and MDI plants in operation along the Gulf Coast. Several TDI/MDI facilities also report dioxin emissions, which we suspect arise from the use of chlorine in manufacturing isocyanates.[2]

To be sure, not all isocyanates go into green building products such as insulation. However, both the large scale of production and the externalization of uncontrolled toxic waste releases are integral to low cost foam-based insulation products.

MDI has also been a preferred substitute for formaldehyde binders in engineered wood products, earning them the much-coveted designation of "formaldehyde-free," as well as LEED credits.

The EPA's action last week makes clear that simply designating a product "formaldehyde-free" or certifying it as having "low-VOC" emissions doesn't tell the full story of its environmental health impact. From an environmental health perspective, some insulation products and some formaldehyde alternatives are better than others. In order to tell the difference, we need full disclosure of what is in a product, not only what has been taken out.