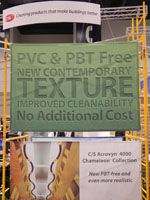 The healthcare sector's influence in creating markets for less toxic building products was on display at the Construction Specialties, Inc. Greenbuild booth this year. Watch C/S's Vice President and General Manager Howard Williams and other health care leaders discuss how they drive change in the marketplace through increased transparency and safer chemicals use.

The US Green Building Council's (USGBC) LEED for Healthcare (LEED HC) rating system passed member ballot on November 16, 2010 with an 87% approval rate. Its passage brings to a close six years of developmental work, including contentious debates over credits for reduced use of toxic chemicals and the hardball tactics of industry trade associations. Environmental and health care activists endorsed the final draft after the USGBC made changes to the LEED Pilot Credit program in order to provide more opportunities to access five credits that were removed from earlier LEED HC drafts and placed in the LEED Pilot Credit Library.

LEED HC was developed using the Green Guide for Health Care (GGHC) as a foundational document, and the USGBC credited the GGHC's "robust pilot program" with informing and streamlining the development of LEED HC.[1] The GGHC, the healthcare sector's first sustainable design toolkit was released in 2004 as a project of the Center for Maximum Potential Building Systems and Health Care Without Harm. It pioneered a series of credits that encouraged reduced use of toxic chemicals as an integral aspect of green design and construction. However, the final draft of LEED HC dropped five credits based upon innovative GGHC credits, including those that would reduce the use of materials containing persistent, bioaccumulative toxins, phthalate plasticizers and halogenated flame retardants. These were placed in the new LEED Pilot Credit Library.

Robin Guenther, FAIA, Perkins+Will, a member of both the original GGHC Steering Committee and the LEED Core Committee, supported the final draft: "LEED HC as approved by the membership remains true to the intent of the collaboration with the GGHC given that the toxics credits are accessible through the Pilot Credit Program. The fact that these credits are not limited to LEED HC and are available to other LEED project types has the advantage of creating many more opportunities to apply them in a wider variety of building systems."

Gary Cohen, Executive Director of Health Care Without Harm, who editorialized against earlier drafts of LEED HC that did not include the toxics credits, endorsed its final passage: "Unfortunately the LEED HC consultative process was abused by political and legal pressure from industries that stand to lose market share because of their commitment to continued use of toxic materials. Consigning the toxic materials credits to the Pilot Credit program is a fragile compromise because we don't know if these credits will become embedded into LEED, and they were one of the defining 'health-based' elements of health care's approach to green building. But what did emerge provides us with a foundation for innovation that is going to go way beyond LEED, as networks like Practice Greenhealth guide the health care sector towards toxic free, carbon neutral, resilient buildings that are a community force for healing beyond the four walls."

Steve Guttmann, PE, LEED AP, Principal, Guttmann and Blaevoet, earned widespread praise as chairman of the LEED HC Core Committee. He acknowledges that the new LEED Pilot Program does not guarantee ultimate adoption of the credits, but adds, "The advantages outweigh the uncertainties in the new program. The Pilot Credit program creates opportunities for motivated practitioners to refine and improve these credits. It avoids situations we have seen before where credits languish, unused because of unfamiliarity or some unforeseen complication that makes them less attractive to project teams. Ultimately I believe the interactive design of the Pilot Credit program is going to drive effective measurement and documentation of reduced chemical exposures from building products, and that is going to build greater support in the community for linking sustainability with health."

The Healthy Building Network's Tom Lent, who also participated in both the GGHC and USGBC committees, is cautiously optimistic that LEED HC will have an enduring legacy: "On the whole, the LEED HC revision process resulted in a significant number of positive health-based improvements to the LEED rating system. For example, LEED HC strengthens mercury restrictions and furniture toxics requirements, and extends indoor air quality protection assessments to all interior surfaces - an approach now being picked up by the draft LEED 2012. Although the toxic credits are in the Pilot Library and therefore remain subject to revision and member ballot, similar requirements have already been successfully piloted by over a hundred hospitals using the GGHC. I am optimistic that these credits - available to all project types - will make the transition to the whole LEED system."

These leaders also agree that ultimately the success of these programs depends upon leadership from LEED project teams. Learn how to earn these credits at HBN's Pharos Project, and join the vanguard by following this link to LEEDuser.