The assault by the petro-chemical industry on scientific integrity – and scientists with integrity – has been well documented.[1] This year, three winners of the 16th Annual Heinz Awards are scientists who are distinguished "by their courageous willingness to communicate the implications of their work, often in the face of determined opposition" from the chemical industry. The three have led efforts to reduce the use and emissions of endocrine-disrupting chemicals, such as dioxin and phthalates, associated with PVC plastic, and BPA (bisphenol A) used in epoxy-based building products and as a liner in food and beverage cans.[2] 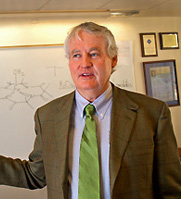 Professor Terry Collins of Carnegie Mellon University encountered industry opposition at Greenbuild 2006 while speaking before a capacity crowd on a panel of Green Chemistry experts. There, as he routinely does in his writings and presentations, Collins took aim at chlorine-based chemistry such as PVC plastic, as an "inescapable source" of persistent, bioaccumulative toxic pollution. As early as 2001, Collins had publicly criticized companies that "have sought to protect their profits by distorting scientific data to make dioxins appear to be less harmful to humans than they actually are," and argued that "it is critical that chemistry that is not really green does not get sold as such, and that the public is not misled with false or insufficient safety information."[3] Similar remarks at Greenbuild earned him more than a few challenges from the floor, and uncharacteristically negative reviews charging "bias" in the official audience feedback provided to all speakers. 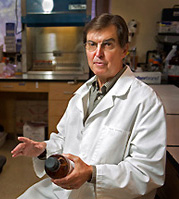 Professor Frederick vom Saal at the University of Missouri has been researching endocrine disruptors, also known as hormone-disrupting chemicals, since 1991, looking particularly at the widely-used BPA (bisphenol A) since 1995. Dr. vom Saal has pioneered remarkable advances in our understanding of how hormone-disrupting chemicals impact human health. His research has demonstrated that hormone-disrupting chemicals can have greater biological impacts at lower doses than at higher doses of exposure, and that while laboratory instruments could not detect the presence of the BPA in food that had been stored in containers made with the chemical, animals that ate the food exhibited a "big effect" from the exposure.[4]

In 1997, his research earned him a visit from an official of the Chemical Manufacturers Association, who suggested that millions of dollars of research funds might be made available to him but asked, "Can we arrive at a mutually beneficial outcome where you withhold publishing this paper until authorized to do so by the Chemical Manufacturers Association?"[5] When vom Saal refused, he found himself the target of persistent professional attacks from the chemical industry.[6] 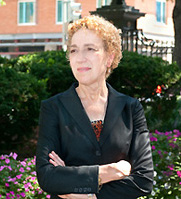 Dr. Lynn Goldman, a pediatrician and epidemiologist recently named dean of the School of Public Health and Health Services at George Washington University, served as the Environmental Protection Agency's assistant administrator for the Office of Chemical Safety and Pollution Prevention (formerly the Office of Prevention, Pesticides and Toxic Substances) from 1993-98. In 1994, her office published the first Dioxin Reassessment,[7] which provoked the Chlorine Chemistry Council to increase its budget six-fold to $12 million, in order to mount a multi-year lobbying and public relations campaign to overturn the findings.[8] Under Goldman's direction the EPA also expanded its work on endocrine-disrupting chemicals in response to the work of vom Saal and others[9] despite massive chemical industry opposition.[10}

[2] The 16th Annual Heinz Award also recognized 7 other environmental leaders in other fields. For a complete list, see, http://www.heinzawards.net/recipients/

[3] A transcript of the 2006 Greenbuild session is not available. For an example of Dr. Collins presentations on persistent, bioaccumulative toxins and chlorine-based chemistry, and to see these quotes in context, see, Essays on Science and Society: Toward Sustainable Chemistry, Science 5 January 2001: Vol. 291. http://www.sciencemag.org/cgi/content/full/291/5501/48

[5] See, Pflaum, Nadia. Missouri biologist Frederick vom Saal and his team exposed the dangers of bisphenol A — and earned the wrath of the plastic industry, p.2, The Pitch, April 24, 2008. http://www.pitch.com/2008-04-24/news/ever-since-university-of-missouri-biologist-frederick-vom-saal-and-his-team-learned-the-dangers-of-bisphenol-a-and-plastic-the-chemical-industry-has-been-trying-to-discredit-them/2/

[7] The Dioxin Reassessment was initiated after the chemical industry objected to EPA's 1984 designation of dioxin as one of the most potent carcinogens yet identified. Industry appealed the 1994 Reassessment, leading to publication of a second reassessment in 2000. The Dioxin Reassessment still has not been completed. For a summary of the 20 year history of delay see, http://www.chej.org/documents/2010/Dioxin%20Key%20Letters/Dioxin%20Timeline.pdf.