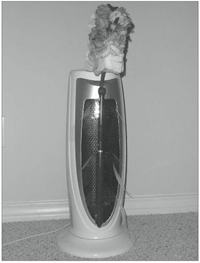 HBN has learned that the EPA Energy Star program will announce that two new products, a space heater with a feather duster attached and a gasoline-powered alarm clock, will soon carry the Energy Star label. The designation will be granted to the products certified as consuming 20 percent less energy than similar products on the market.

Sound familiar? That might be because it is the same lead paragraph that we used to introduce our April Fools edition last year, when we announced that the USDA had awarded its Organic label to Organic Vinyl. Or, it might sound familiar because the facts are drawn from last week’s true New York Times story describing the Government Accountability Office’s determination that the EPA’s Energy Star program was “highly vulnerable to fraud.” When the truth is this much stranger than fiction, the wise satirist lays down his pen - at least for this year.

Energy usage is one of the most easily quantified and measured environmental attributes, so challenges to the reliability of the venerable Energy Star Program cast aspersions on the entire regime of green labeling programs, many of which certify far more complex attributes such as forest habitat management or human health hazards. The problems reported by the Times go beyond government ineptitude. Multiple investigations suggest that after 18 years as an environmental icon, the Energy Star label may have little relationship to the actual energy performance of electrical devices and reduction of greenhouse gas emissions.

The problem is the oversimplification inherent in relying on a marketing logo rather than verified or verifiable product information when evaluating products. Recently completed research by my colleagues in the Pharos Project illustrates why we must move beyond reliance on green logos and labels toward a new era of informational transparency.

Pharos Project researchers recently evaluated drywall, mindful of research that linked Chinese drywall to higher-than-normal levels of hydrogen sulfide gas in homes. Reviewing EPA tests of both Chinese- and American-made drywall revealed an additional problem: product from both countries also contained mercury. Further research linked the mercury in drywall to the use of synthetic gypsum generated from the Flue Gas Desulfurization units of coal-fired power plants, and largely ruled out natural (mined) gypsum as a substantial source of the toxic metal. Only one product had a third-party verification for being “mercury-free,” and it did not use gypsum at all.

The reuse of post-industrial waste material such as synthetic gypsum is generally considered to be environmentally positive. Indeed, the Pharos Project gives points toward its renewable materials scores for post-industrial content such as this. But one can see how a green label or certification for only this attribute would not tell the whole story, and might even impede the ability of the mercury-free product to differentiate itself in the market place.

Federal officials have pledged to address some of the most embarrassing problems exposed by the GAO report, but The New York Times documents numerous structural flaws in the Energy Star program that are not easily remedied. These include a sluggish standards revision process and loopholes in the regulations, which according to an analysis by Consumers Reports, “lets manufacturers label products more energy efficient than we've found them to be, and they get the Energy Star and its cachet when you won’t see those savings.” For example, the testing protocol for refrigerators calls for the ice-maker to be turned off. In one case this resulted in 50% less energy use than a consumer can expect during normal operations.

Energy Star claims that over 1 million Energy Star homes have saved Americans $1.2 billion on their energy bills, and reduced greenhouse gas emissions by 22 billion pounds since 1995.[1] Senator Susan Collins (R-ME), who requested the GAO investigation, told the Times that people relying on the logo were paying extra for products that might not actually save energy. When we rely on decals instead of data to protect the environment, we are only fooling ourselves.