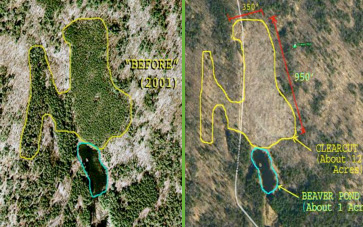 I recently received an email asking me to help stop the certified forestry practices pictured to the right.[1] An investigative report by a local television station documented that among other things, few members of the certifying body had visited the site, and “none of them had any forestry education.” Asked on camera: “How is this protecting the forest,” a professional forester replies: “It’s not.” Here’s the catch – they are talking about the Forest Stewardship Council (FSC).

Incidents like these appear to lend credence to the view that the USGBC should stop “quibbling over the relative merits” and recognize multiple forest certification systems.[2] So why is the Healthy Building Network urging you to join a call to action and support the groups that are defending the FSC credit in LEED?

Because we agree with the Sierra Club’s position on the FSC:

Currently, the FSC is the only credible forest certification system...

Competing schemes lack the stringency and the checks and balances-and hence the credibility of the FSC.

As supporters of FSC, the FSC and its certifiers need to be held accountable to ensure that the promise of credible forest certification is fulfilled. The FSC itself is not perfect and from time to time Club activists have challenged specific certifications performed by FSC-accredited certifiers.

One of the most maddening things about the 4-year assault on LEED’s FSC credit by the timber industry’s old guard is that so many voices of accountability have been muted out of fear that any criticism of FSC at this point will erode confidence in an organization under siege, and result in a lower standard. By adopting the playbook of cigarette science and the climate skeptics, the big timber companies have manufactured a specious controversy: will systems they created and dominate theoretically produce healthier forests than the independent, multi-stakeholder FSC process?[3] No. Virtually all organizations dedicated to preserving forest ecosystems agree – as do many forest products companies -- that the USGBC should only amend its LEED credit to be “FSC or Better.” The USGBC proposals have not yet met that standard.

There is now an excellent portal to reliable sources of information about forest certification and the extensive record of debate in the USGBC. A new in-depth series in an online news journal from British Columbia offers a succinct narrative of the history of the FSC, SFI and the debate within LEED. Let this history guide you through current events, and as the Watergate-era saying goes, follow the money.

Since its founding in 1993, the FSC has received core financial support from philanthropies like the Ford Foundation. Many forest products companies do participate in the FSC and believe its governance structure offers them ample opportunity to get a fair shake.

The largest North American companies with some of the worst logging practices resisted the FSC from the beginning, and within a year created the SFI, housed from 1994-2000 in their trade association, the American Forest and Paper Products Association (AFPA). Not surprisingly, this organized resistance has created the false scarcity of FSC-certified timber from North America, which is the basis of their top argument against the current LEED credit – that it “discriminates against North American forests.”[4]

The SFI and FSC do agree on one important fact. According to a March 1, 2010 statement by the SFI: "If the USGBC maintains the status quo and does not recognize the SFI Standard, many LEED builders who chase points will turn… to FSC wood."[5] That is exactly what we need to happen so that we all can turn our attention back to the real question: is the certification process improving the state of imperiled forest ecosystems?

Please take a moment to read this important action alert. There, you also will find information about the latest USGBC proposal, and critically, the USGBC balloting process, which requires that interested USGBC members affirmatively “opt-in” to the “consensus body” if they wish to vote on the final recommendations. Please Opt-In Right Now! The opt-in deadline is March 24th.

[3] In May 2006 the USGBC's Board justified these proposals as a "response to the escalating debate over wood and wood certification" in LEED. But One USGBC Board member offered a more candid explanation: "We needed to start the process because, like it or not, AFPA [timber industry trade association] efforts to undermine the adoption of LEED nationally are working and we need to take the 'LEED is anti-wood' arrow out of their quiver."