March 17th marks the 10th anniversary of the EPA order that made it illegal to use the arsenic-based pesticide CCA (chromated copper arsenate) to treat wood intended for most residential uses, including wood destined for decks, picnic tables, landscaping timbers, gazebos, residential fencing, patios, walkways and play structures. This is also a happy milestone for the Healthy Building Network, marking the first major success of our then 3-year-old organization and our mission to transform the market for building materials to advance the best environmental, health and social practices.

The results are now in, and according to the US Geological Survey, the HBN-led campaign to phase-out the use of arsenic-based wood treatment formulas in 2003 has reduced the amount of arsenic used in the United States (measured by imports) from over twenty metric tons annually to approximately six.[1] 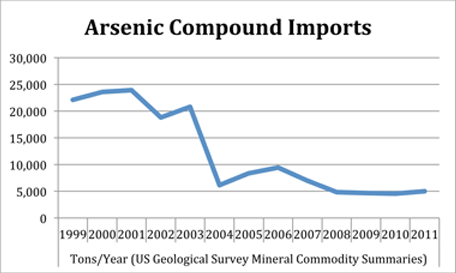 The focused debate over CCA-treated wood was a microcosm of the divergent views on how to deal with toxic hazards in building products in general. In order to avoid the known hazards posed by CCA-treated wood throughout the product's lifecycle, HBN and many end-users advocated a precautionary approach that would discourage or restrict the use of arsenic-based treatment compounds where safer alternatives exist. The chemical industry called for more "risk analysis," evidence of harm caused by arsenic at each stage of the product lifecycle. The cost of such study would be externalized, as would risk mitigation strategies: workers wearing more protective gear, parents washing children’s hands more often, municipalities remediating contaminated soils and water.

Ten years ago common sense prevailed because consumers learned what chemicals were in pressure treated wood, and compared those products with alternatives that did not possess similar hazards. Some pressure treated wood companies who were early adopters of safer alternatives supported the transition in order to preserve their industry's market share against competitors ranging from hardwoods to plastic lumber. New products entered the field, such as Timbersil, which Environmental Building News called "a revolution in the treated wood industry." Most importantly, eliminating one toxic hazard from one building material, reduced -- drastically, rapidly and permanently -- the amount of arsenic posing a hazard to our drinking water, to children and to workers here in the United States and at anonymous arsenic smelters in China.[2]

Today this success stands as a testament to the positive potential of systematic product disclosure and chemical avoidance initiatives[3], and a healthy rebuke to the chemical industry's specious arguments that common sense disclosure and precautionary measures are too expensive, confuse consumers or reduce the quality of our buildings.

[2] Most arsenic used in the US was imported, largely from China. What little documentation is available suggests the environment and workers suffered there as well. See e.g. Ian H. von Lindern, et. Al., Remediation of Legacy Arsenic Mining Areas in Yunnan Province, China Blacksmith Institute Journal of Health & Pollution Vol. 1, No. 1 - Feb