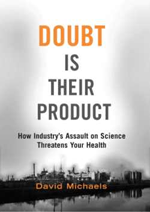 “… manufacturers of dangerous products tout “sound science” . . . . Only the truly naive (if there are any of these folks left) will be surprised to learn that the sound science movement was the brainchild of Big Tobacco.” --DOUBT IS THEIR PRODUCT, David Michaels, Oxford University Press

“ … how pervasive, effective and stealthy this science-for-hire is—as masterfully documented by David Michaels—will shock anyone . . . .” --Newsweek, May 12, 2008 issue

For nearly a decade, the chemical, plastics and timber industries have been attacking efforts by the US Green Building Council to establish LEED™ credits that would discourage the use of materials such as vinyl and unsustainably harvested timber. If you think this is because there are strong scientific arguments in support of their positions, a new book will change your perspective on these enduring controversies.

In Doubt Is Their Product, Dr. David Michaels, a former Assistant Secretary of Energy for Environment, Safety and Health under President Clinton, exhaustively documents the rise of the “product defense industry” and its strategy of using scientific discipline to establish controversies (i.e., starting something that is intended to continue or be permanent[1]), rather than establish facts (i.e., investigating something to confirm its truth or validity[2]) as a means of frustrating efforts to address public health risks from asbestos, benzene, aspirin (Reye’s syndrome in children), global warming and, of course, vinyl.

“Doubt is our product,” wrote a Brown and Williamson[3] executive in 1969, three years after the iconic warning label first appeared on cigarette packs, “since it is the best means of competing with the ‘body of fact’ that exists in the minds of the general public. It is also the means of establishing a controversy.”[4]

The business of establishing controversies in the 1960’s and 70’s fathered the contemporary “sound science” movement, which was born on December 13, 1993, according to an ignoble birth certificate Michaels locates among the infamous “tobacco papers,” Document No. 2046988980/8982. It’s a press release from The Advancement of Sound Science Coalition (TASSC) dedicating itself “to ensuring the use of sound science in public policy decisions” and according to Michaels, the “the first entity to carry the official ‘sound science’ flag.”[5] The TASSC was actually a tobacco industry front group.[6]

The success of TASSC[7], now defunct, spawned a network[8] of “specialty boutiques run by scientists” that “go through the motions we expect of the scientific enterprise” and “play by the rules of the discipline,” but whose “work has one overriding motivation: advocacy for the sponsor’s position. . . .”[9] An essential part of these operations are deceptively named “public policy” think tanks and peer-review journals which sound neutral, e.g., the Journal of Regulatory Toxicology and Pharmacology, but which are dependent upon industry funding and routinely salt the scientific literature with controversial industry-funded studies.[10]

Michaels concentrates his reporting on his considerable first-hand experiences where, he writes, “I had the opportunity to witness what is going on at close range.”[11] He bears witness for 256 pages and backs up his observations with an additional 119 pages of endnotes, many of these referencing original documents that can be accessed through his website, www.defendingscience.org.

One of his first-hand experiences involves polyvinyl chloride plastic, also known as PVC or vinyl. The story of the vinyl industry’s cover-up of rare cancers among its workers in the mid-1970’s has been well documented elsewhere[12], including the documentary Blue Vinyl and the PBS investigative report Trade Secrets. Michaels connects the dots, documenting how, in 1974, the same public relations firm that created the “selling doubt” strategy for the tobacco industry would “establish uncertainty” about the risks of vinyl chloride for the PVC industry. They're still at it.

Doubt Is Their Product concludes with a chapter offering “a dozen ways to improve our regulatory system.” Many of these could be adapted by green building policy makers such as the LEED™ Steering Committee, or by anyone interested in testing whether an industry stakeholder is interested in establishing the facts, or just establishing a perpetual controversy.[13] It will most certainly cast a new light on the arguments being advanced today by the chemical, plastics and timber industries to water down green building policies like LEED™.[14]

[3] Brown & Williamson was an American tobacco company and subsidiary of the giant British American Tobacco, that produced several popular cigarette brands including: Kool, Lucky Strike, Pall Mall and Viceroy. It became infamous as the focus of investigations for chemically enhancing the addictiveness of cigarettes. Its former vice-president of research and development, Jeffrey Wigand, was the whistleblower in an investigation conducted by the highly respected CBS news program 60 Minutes, an event that was dramatized in the film The Insider. Wigand claimed that B&W had introduced chemicals such as ammonia into cigarettes to increase nicotine delivery and increase addictiveness. Brown & Williamson had its headquarters at Louisville, Kentucky until July 30, 2004, when the U.S. operations of Brown & Williamson merged with R.J. Reynolds, creating a new publicly traded parent company, Reynolds American Inc. Source: http://en.wikipedia.org/wiki/Brown_and_Williamson.

[6] TASSC was established by APCO Associates, a public relations firm spun off from the Washington DC law firm Arnold and Porter.

[7] Federal regulatory initiatives were underway to target second-hand smoke based upon emerging science about its hazards and growing public support for precautionary measures. TASSC’s mission was to beat those initiatives back. The gradual success of state-level public smoking restrictions often obscures the fact that TASCC in fact succeeded in frustrating efforts to regulate second-hand smoke by OSHA, EPA and the FDA. See, Doubt Is Their Product, p. 90.

[8] These include, among others: ChemRisk, Exponent, Inc. the Weinberg Group. “In field after field, year after year, this same handful . . . . comes up again and again.” Doubt Is Their Product, p. 46.

[10] Sometimes the connection between industry and a journal or organization is deliberately hidden, see, e.g., the tobacco industry-financed journal Indoor and Built Environment. Doubt Is Their Product, p. 53.

[12] See, e.g. Deceit and Denial: The Deadly Politics of Industrial Pollution. Gerald Markowitz and David Rosner. University of California Press, 2002. See also Toxic Sludge is Good For You and Trust Us We're Experts, both by John Stauber and Sheldon Rampton, and The Republican War on Science, by Chris Mooney.

[13] These include e.g., (#1) Require full disclosures of any and all sponsor involvement in scientific studies; (#3) Manufacturers must disclose what they know about the toxicity of their products; (#5) Hold real people accountable for the accuracy—and completeness – of statements of corporations and trade groups.